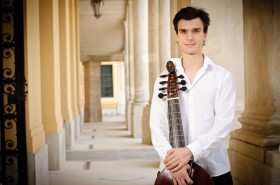 In Spain he participated in several masterclasses with Jordi Savall, and from 2004 to 2007 he studied with Vittorio Ghielmi at the “Conservatorio de la Svizzera Italiana” in Lugano (CH).

Christoph Urbanetz has appeared as a soloist in many recitals all over Europe including playing at the Innsbruck Early Music Festival in 2009, in Vienna at the Konzerthaus (Resonanzen 2009), the Musikverein (2010) and the Palais Liechtenstein (2010), in Zurich (Forum Alte Musik 2008 and 2012), Reutlingen (Musiqua Antiqua 2010), London (Handel House and Austrian Cultural Forum 2010), Cambridge (Clare Hall 2010), Milan (Teatro dal verme 2008), Budapest (Liszt Academy of Music 2009 and Marble Hall 2012), as well as broadcasts with the ORF, DRS and WDR. In 2012 he appeared together with Vittorio Ghielmi in a Duo Concert at the hungarian radio. From 2006 to 2007 he worked together with the italian pop singer Vinicio Capossela and the cellist Mario Brunello.

Besides he made various CD- and TV-recordings (e.g. “Membra Jesu Nostri” with René Jacobs for Harmonia Mundi). In 2009 his album “The Forqueray Family” appeared on Brilliant Classics.

Christoph Urbanetz is a lecturer for Viola da gamba at the University of Music in Graz.