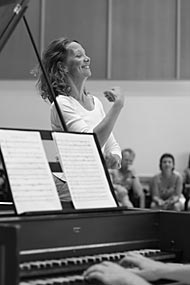 Deborah York, lyric-coloratura soprano has established a reputation as one of the finest singers of her generation. Especially renowned for her performances of 17th and 18th century repertoire she is as equally at home in the music of the northern baroque masters as in Italian and her native English.

Intruigued by the interconnectedness of genres, languages and styles, her curiosity has led to her working closely with many distinguished musicians exploring both the secular and the sacred, in concert, opera, dance and chamber music of all periods.

Born in Sheffield, Deborah graduated from Manchester University with a first class honours degree and went on to study with Laura Sarti and Janice Chapman in London. She now lives in Berlin and works with vocal coach Annette Goeres. Alongside a busy performing schedule Deborah teaches at her studio in Berlin as well as giving masterclasses. She is Artistic Director for the Austria Barock Akademie in Gmunden, 2009.

On the operatic stage she is appreciated for her musical integrity and for portraying a variety of characters with disarming honesty. Deborah has performed in opera houses throughout the world including Covent Garden, Glyndebourne, Teatro Colon in Buenos Aires, Sydney Opera House, Semperoper Dresden, Amsterdam, and at the Staatsoper Unter den Linden in Berlin. She has been a regular guest artist at the Bayerische Staatsoper in Munich, creating the roles of L'Amour in Gluck's Orphee, Lucia in Britten's The Rape of Lucretia and singing Oberto in Handel's Alcina and Almirena in Rinaldo, recorded live for DVD. She created the role of Mirror in Harrison Birtwistle's The Second Mrs Kong for Glyndebourne Opera and was awarded a Grammy for her recording of Stravinsky's The Rake's Progress in the role of Anne Truelove, recorded for Deutsche Grammophone with the London Symphony Orchestra and John Eliot Gardiner.

Deborah has toured extensively in concert with Philippe Herreweghe and Collegium Vocale and Ton Koopman and the Amsterdam Baroque Orchestra performing works of J.S.Bach. As a renowned Handelian she has sung with conductors such as Markus Creed, Ottavio Dantone, Marc Minkowsky, Christophe Rousset, Paul McCreesh and Trevor Pinnock, as well as performing and recording works by Vivaldi and Scarlatti with Rinaldo Alessandrini, The King's Consort and Alessandro de Marchi.

Deborah regularly gives solo chamber recitals with ensembles such as Freiburger Baroque Orchestra, Akademie für Alte Musik Berlin and Stagione Frankfurt. With her own group the amritaensemble she performs baroque cantatas with single strings in the most intimate of chamber formations. Recent concerts were enthusiastically received at the Aldeburgh Festival and Radialsystem in Berlin. Forthcoming engagements include a festive Christmas programme with trumpeter Ute Hartwich in the Philharmonie, Luxemburg.

Deborah's extensive discography includes cantatas by J.S.Bach with Philippe Herreweghe for Harmonia Mundi and with Ton Koopman and the Amsterdam Baroque Orchestra.

Recent releases include a live recording from the Bayerische Staatsoper in Munich of Händel's Alcina (Oberto) with Ivor Bolton, Belinda in Purcell's Dido and Aeneas with the Sasha Waltz dance company on DVD and a disc of duets with mezzo soprano Lydia Vierlinger, Jörg Zwicker and Capella Leopoldina for Capriccio.