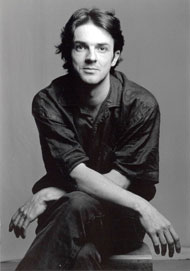 Thomas Fheodoroff studied violin under Günter Pichler and Ernst Kovacic and formal analysis under Karl-Heinz Füssel at the Vienna University of Music, where he graduated with honours in 1996.
In addition to his studies he was engaged in Ancient Music intensively and he collaborates with the Concentus Musicus under Nikolaus Harnoncourt since 1990. A number of engagements followed: From 1995 to 1997 he played the violin at the Vienna State Opera House Orchestra and the Vienna Philharmonic Orchestra, in 1997 he became acting leader of the orchestra with the Munich Chamber Orchestra. Since 2000 he is acting leader of the orchestra and soloist with the Vienna Academy playing on historic instruments.
The engagement with sonatas and partitas for solo violin from Johann Sebastian Bach plays an important role. A highlight will be the recording of all sonatas and partitas for solo violin in summer 2006.
Invitations of international orchestras as soloist and conductor as well as performances as chamber musician with old, new and improvised music led him to nearly all countries of Europe, to the orient, to Japan and to the USA. Furthermore he performed at important festivals like Styriarte, Carintian Summer and more. He played solo-concerts in the Vienna Musikverein and the Vienna Concert Hall.
From 1999 to 2004 Thomas Fheodoroff was the leader of a workshop for Ancient Music at the Kärntner Landeskonservatorium in Klagenfurt. In 2003 he followed an invitation of the Tchaikovsky Conservatory in Moscow to lead a class for Ancient Music. Since 1997 he teaches the violin at the Vienna University of Music as assistant to Ernst Kovacic.
An increasing number of performances are planned as conductor with the ≥Ensemble Prisma Wien≈ for the future. In this ensemble there are musicians who are characterized by their stylistic flexibility and spectrum and who are equally competent on historic as well as modern instruments!
academy | activities | instructors | awards | gallery | projects | sponsors | General Site Map
Back to content | Back to main menu